Lindsay Cope is in her final year of a 27-month service assignment as a Peace Corps volunteer, while earning her master’s degree

After a brief career in business development, Lindsay Cope ‘06F is now serving a 27-month stint as a Peace Corps volunteer supporting local communities in the Philippines, at the same time earning her master’s in international environmental policy from the Middlebury Institute of International Studies at Monterey.  She wrote in her blog that transitioning from her young career to continue her studies and perform international service “was the best decision I could have made.”

Among her activities in her first year in the archipelago island nation, she –

The Philippines is ranked globally as the country most at risk to climate change, according to the Climate Risk Index. In April, Cope organized a seminar in Pandan, in the province of Antique, for its first Earth Day celebration, during which she presented the townspeople with information about climate change and its effects.

All the participants signed a tarpaulin that was sent with a letter from Filipino government officials to the UN Paris Climate Summit to emphasize the urgency for action, a statement from the community against the disproportionate costs of climate change.

Resulting from the success of her Earth Day event, Cope was invited to work with the Department of Social Welfare to educate low-income families about climate change. She wrote in her blog, “I work with the poorest of the poor, but they are generous, happy, thriving despite their meager income. It is a poverty with hope and with community and with support.”

In the fall, Cope was transferred to Calatagan, in the province of Batangas, where she’ll be completing her final year of Peace Corps service by supporting community programs for solid-waste management and marine tourism.

Cope is one of almost 10,000 Peace Corps volunteers who have served the people and communities of the Philippines since 1961, the year President Kennedy founded the global program. “I am grateful I am where I want to be,” Cope wrote, “where I have worked to be.” 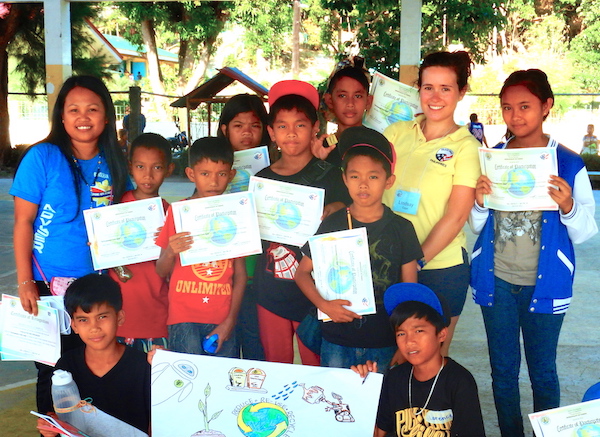