The most severe impacts of global warming affect people in poor communities, President Lash stressed at the ceremony

“Hampshire students have not lived through a normal climate year,” noted School of Natural Science Dean Steve Roof in remarks at the groundbreaking ceremony for Hampshire College’s 19 acres of solar arrays, soon to provide 100 percent of campus electricity on an annualized basis. A week ago he’d been in the Arctic leading undergraduates on an annual research trip. “The glacier I walked on is now forty feet thinner compared to when I walked on it ten years ago,” he said, illustrating an effect of climate change. It’s a serious problem: The last month when global temperatures were below average was December 1984—32 years ago, he said.

Roof and half a dozen other speakers from Hampshire and its solar-project partners delivered remarks at the groundbreaking for the system, which will span two sites, comprise 15,000 solar panels, and generate 4.7 DC/3.5 AC megawatts. The CO2 emissions eliminated—3,000 metric tons/year—will be equal to taking almost 650 cars off the road.

The Hampshire employee who manages the solar project, Todd Holland, emceed the ceremony and said he’s honored to work at a college with such a bold vision, alongside such committed collaborators on- and off-campus. He then introduced Hampshire College President Jonathan Lash, who announced the project is estimated to save the college up to $400,000 a year in electricity costs. Under a power-purchase agreement, the solar arrays will be built, owned, and operated by SolarCity, and Hampshire will purchase the electricity from the company at a fixed rate roughly half of what the College is now paying.

But more important, Lash said, by implementing its Climate Action Plan and moving forward on a project of this magnitude, Hampshire is practicing its mission in the areas of research, experiential education, social justice, and environmental action.

“The most severe impacts of global warming affect people in poor communities,” he said. “Those of us whose communities have most benefited from fossil fuels have a moral obligation to those who are suffering the worst effects of climate change.”

Just as significant is positioning the array fields for education and research. Hampshire faculty and students have already initiated research into the science and impact of solar arrays on land use and ecosystems, Lash said.

Led by its Environmental Committee, Hampshire has been planning how to transform its ability to generate electricity since 2014. After reviewing current and future use of possible sites, the College chose two optimal sites.

Naya Gabriel, Hampshire’s lab manager and greenhouse supervisor and former chair of the Environmental Committee, explained in her remarks how she and its members representing students, faculty, and staff—among them Beth Hooker, Larry Archey, Fred Wirth, and Donna Cohn—worked to identify fields best suited for the arrays.

Their goal was to ensure this development would maintain ecosystems, improve soil quality, and promote research, education, and best practices. “This development, in demonstrating the coexistence of renewable energy with agricultural use, will be a model for landowners in the region,” Gabriel said. “The soils and lands will be preserved and can be returned to agriculture or used for other purposes as desired by the future leaders of the College.”

Another committee member, Pam Tinto, associate dean of students, explained that the group initially hosted presentations for the Hampshire community and neighbors to solicit feedback. The responses influenced the choice of the fields, she said, by taking into account other campus priorities, particularly the Hampshire College Farm’s popular Community Supported Agriculture (CSA) program and the College’s food challenge, the goal of which is to source all campus food from local vendors.

Tinto said another criterion they considered was aesthetic impact. “For me, the view of the Holyoke Range from campus always felt like coming home,” she said. “The addition of the solar panels will serve as a positive reminder of our Earth stewardship through a commitment to clean energy.”

Other speakers at the ceremony, on behalf of Hampshire’s project partners, were District Representative Keith Barnicle, from Congressman Jim McGovern’s office; Miles Hovis, of SolarCity; and Steven Strong, of Solar Design Associates.

Trucks carrying the materials for the arrays rumbled by during the ceremony, as planning has now given way to construction. Building the arrays, which will comprise the largest-known on-campus system among colleges and universities in New England and one of the biggest in the eastern United States, is estimated to be completed by the end of this year.

One array field—located off a dirt road far behind forests and the College’s multisport facility (the Bay Road Tennis Club)—will be invisible to the public. The second one, at the corner of West Bay Road and Route 116, across from Atkins Country Market, will be highly visible.

Steve Roof said the sight of solar fields will be new to many people, and that some might be nervous about them. He was quick to allay any fears. They’re not harmful, he said, and certainly “they’re far less harmful than blowing up a mountain to get coal, stripping Arctic tundra to excavate tar sands, or burning coal in an urban neighborhood.” 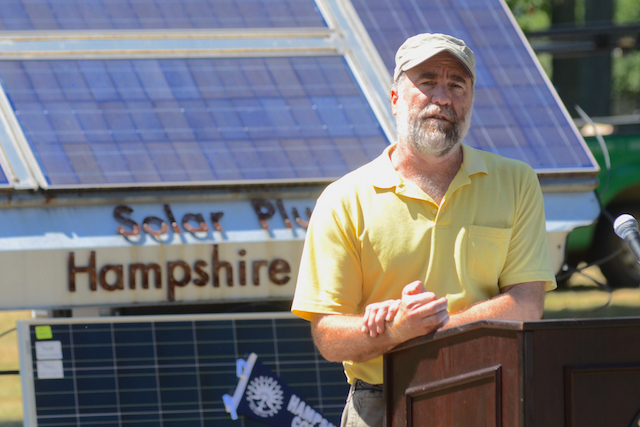 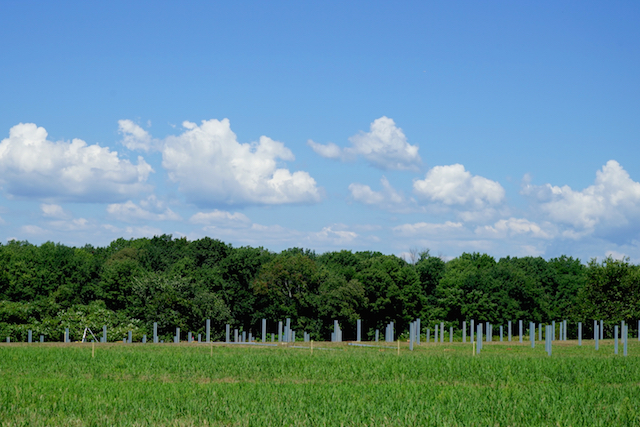 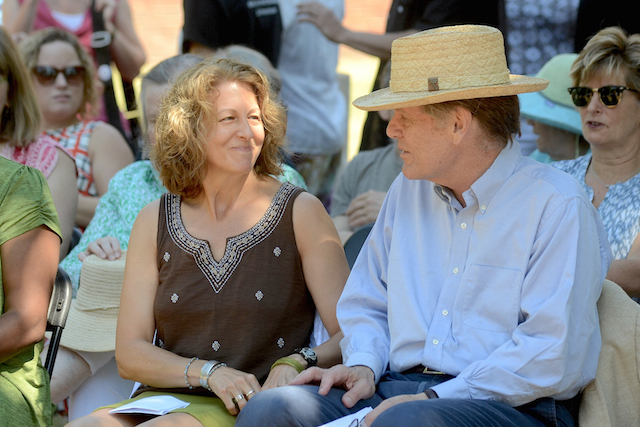 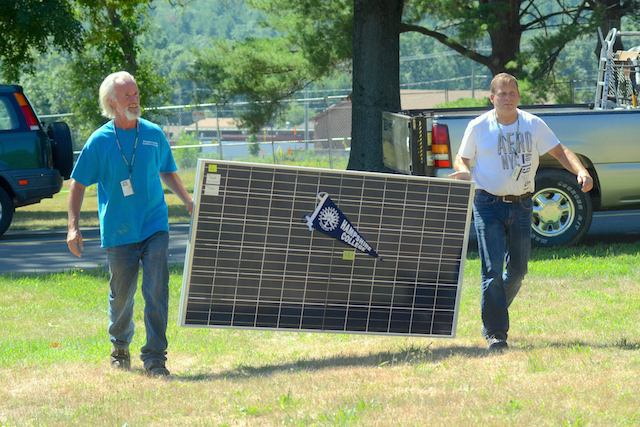