A new exhibit on campus brings new focus to the work of two of the most important grassroots political organizations in US history, the Black Panther Party and the Young Lords Party.

The exhibit Power and Memory: 50 Years of Struggle, Shared Legacies of Resistance, is an assemblage of images, texts, publications, visuals, audio material, and other ephemera collected to commemorate 50 years since the founding of the Black Panther Party in 1966, and 47 years since the founding of the Young Lords Party in 1969. The exhibit is on display and open to the public on the first floor of the Harold F. Johnson Library through April 10, 2017.

With this exhibit, curators Professors Chris Tinson and Wilson Valentín-Escobar with Research Librarian Alana Kumbier intend to renew the light shed on the theorizing and organizing efforts of these influential political organizations.

“Though still misunderstood and new histories are still emerging, these organizations linked a range of voices, histories, and perspectives towards a radical critique of the intertwined forces of racism, imperialism, patriarchy, and capitalism,” the curators state in the exhibit’s accompanying materials. “Importantly, these activists, artists, and organizers often deployed their passions in the creation of visual art, music, plays, and poetry alongside, and indeed, energizing party platforms and explicit demands on institutions of government.” 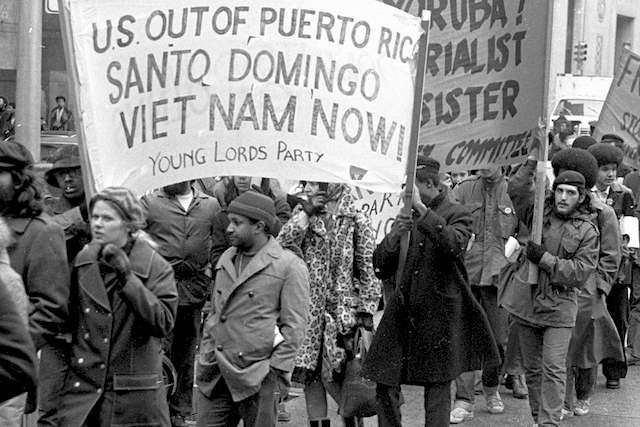