Grads Urged to Nurture Community, Work for Justice at 2017 Commencement

President Jonathan Lash’s nod to the bell ringing, the “very sweet sound that brightens every spring” and marks a student's passing their Division III project, was coupled with another acknowledgment: of the families who supported the 306 students receiving diplomas at Hampshire’s 47th commencement, on Saturday, May 20.

Those students, who had wrestled with difficult questions, recruited and collaborated with their faculty committees, and “ignored conventional approaches,” said President Lash, developed skills they'll be able to call on throughout their lives.

Student speakers Namrata Jacob and Charisse DelVecchio spoke to the crowd of 2,500 about the importance of love in building a community, a lesson learned partly as resident advisers in the Hampshire dorms.

“The way we care for ourselves and for our communities cannot be disconnected,” said DelVecchio. “Self-care, community care, is about deciding to be vulnerable enough, humble enough, to care deeply enough, to give everyone you love everything you’ve got.”

Added Jacob: “Where you find your families, where you build your home, that is your orientation to justice, and that is your life. This is the most political thing we can do, to be deliberate with whom we love, and love them with everything we have left.”

Commencement speaker Keeanga-Yamahtta Taylor challenged students to use those hard-won skills and be part of the revolutions taking place all over the globe. A community organizer, scholar, assistant professor of African American studies at Princeton, and author of From #BlackLivesMatter to Black Liberation, Taylor encouraged students to embrace history, struggle, solidarity, and hope as building blocks for their lives. “Given this current reality that becomes more surreal with each passing day,” Taylor said, “it’s easy to be discouraged, but you shouldn’t be. Now is the time for defiance.

“A life of activism and struggle can be exhilarating, frustrating, challenging, but always interesting,” she said. “Continue to read, keep questioning, listen more intently, and learn from the experiences and mistakes of others. Another world is possible if we are willing to fight for it.”

On Wednesday May 31, Taylor announced in a public statement she had received death threats and hate emails after Fox News broadcast excerpts of her speech as an "anti-POTUS tirade," leading her to decide to cancel scheduled lectures on the West Coast and attracting more national media attention.

The Hampshire community responded with letters of support for and defense of Taylor: One was issued by President Jonathan Lash and Chair of the Board Gaye Hill, and another letter was initiated by a group of Hampshire faculty and signed by more than 1,500 supporters and growing from the broad Hampshire community and well beyond.

A similar message was shared with Hampshire’s 2017 graduates the night before the Commencement ceremony by Uditi Sen, assistant professor of South Asian studies and history, who delivered the faculty remarks during Friday evening’s Community Reception. She asked the graduating class to develop a strong political and cultural compass, speak truth to power, and to insist that dissent is patriotic despite the challenges that come with it.

“Dream up the unmaking of the world as it is, and then just be yourselves,” said Sen. “Be the dream builders I know you are. While you’re at it, stay in touch. You have in us cheerleaders and supporters for life.”

Staff speaker Justin Vezina gave a big shout-out to his extended community at Hampshire, thanking dozens of students, staff, and faculty who have crossed paths with him and made an impact on his life over the years in his custodial role at the College.

“If I have anything more to ask of you, it’s to realize you’ll never be as powerful as you are today,” he said. “If you’re waiting for that perfect opportunity to arise, you’ve missed it.”

Among those who addressed the community over the two days of commencement activities were Board of Trustees Chair Gaye Hill, student moderator Yvonne Hamisi, alumni speaker Ellen Sturgis, Vice President for Academic Affairs and Dean of Faculty Eva Rueschmann, and Director of Spiritual Life Liza Neal.

Commencement weekend began Friday with the annual Division III showcase, in which more than 50 students displayed their Div III capstone projects and explained the research that went into them. 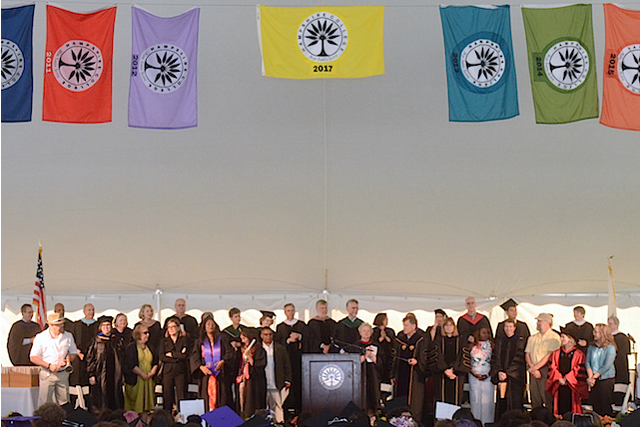 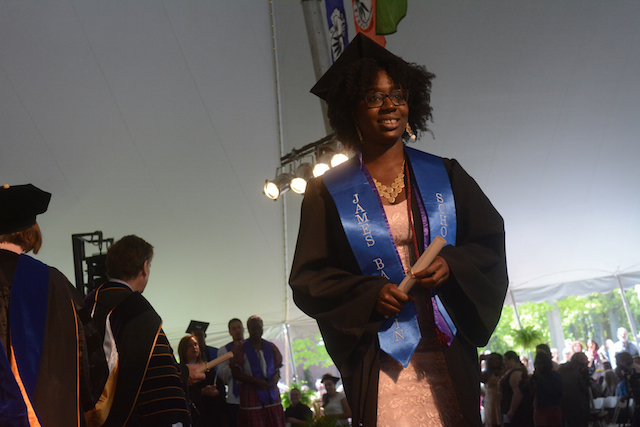 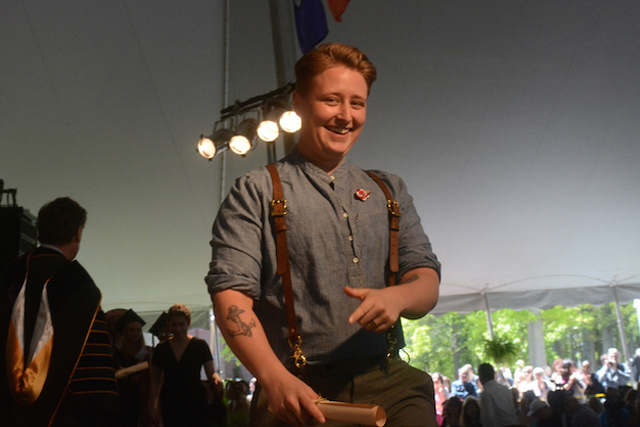 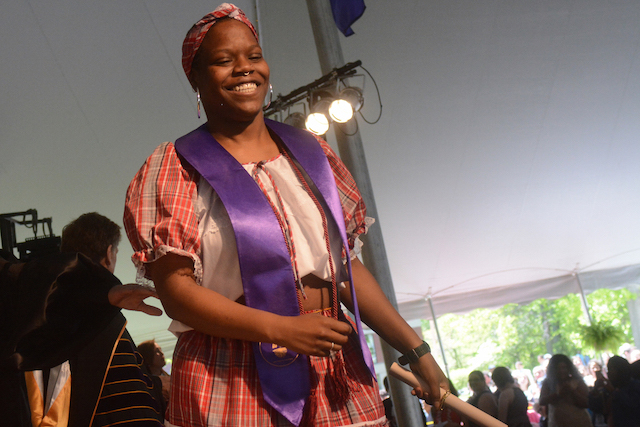 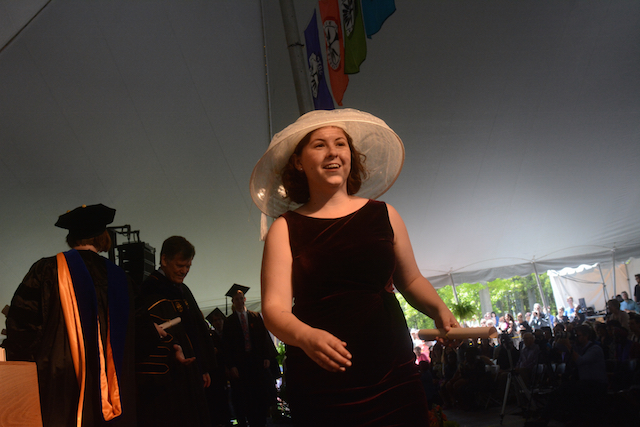 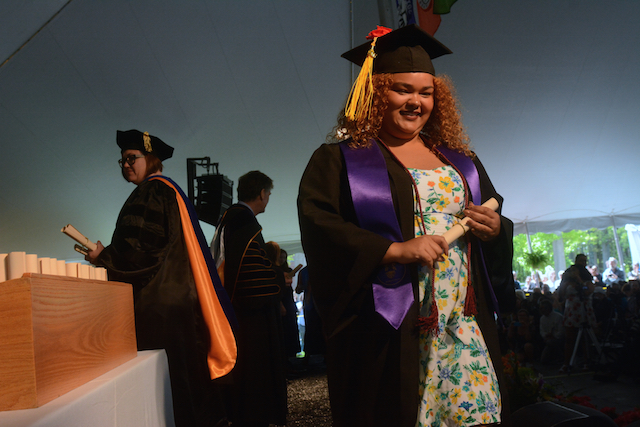 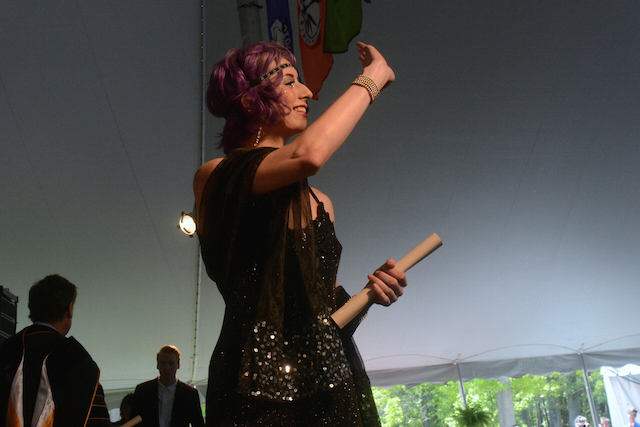 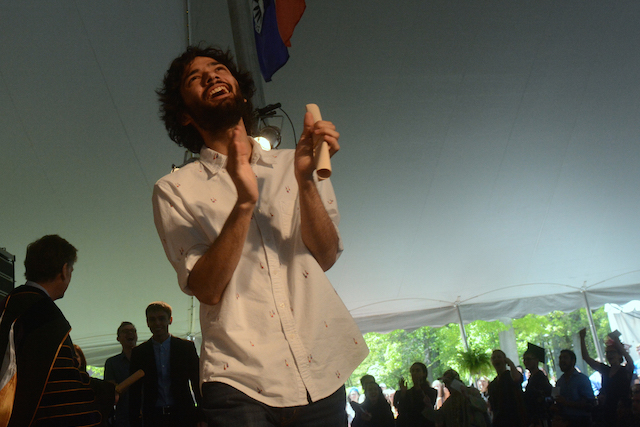