“In Jackson, we’re building a dignity economy. No human being is disposable, so the government must attend to each and every one of its citizens,” said Safiya Omari, one of three keynote speakers at this year’s Eqbal Ahmad Lecture: Jackson Rising: Participatory Democracy, Solidarity Economy, and the Struggle for Racial Justice in Jackson, Mississippi.

On November 8, staff, faculty, students, and other members of the community filled the Robert Crown Center for the lecture, the 21st in a series that takes place annually and has become one of Hampshire’s traditions.

The lecture, which was live-streamed to an international audience, marked the first day of a two-day symposium that celebrated the scholarship and activism of the late Eqbal Ahmad, a longtime Hampshire professor.

The keynote speakers appearing with Omari — Rukia Lumumba and Charles Taylor — are city government officials, community organizers, and political strategists. The three have worked together in Jackson to create economic democracy, black self-determination, and political transformation.

Introducing the panel of guests, Amy Jordan, associate professor of African American history, who has written extensively about political activism in Mississippi, called them “the inheritors of Mississippi’s vast organizing tradition,” adding, “today, our speakers will provide a vision for the future.”

The speakers framed their community-based activism as a contemporary extension of the civil rights movement and black activism of the early 1970s. They aim to advance community empowerment through worker cooperatives and democratically run open meetings called people’s assemblies.

All work with the current administration of Jackson’s progressive mayor, Chokwe Antar Lumumba, the son of the late Chokwe Lumumba, who served as Jackson’s mayor briefly before his death, in 2014.

Following in his father’s footsteps, Mayor Lumumba, who took office in 2017, has called for Mississippi’s capital to become “the most radical city on the planet.”

Taylor, who spoke first, has been a state organizer for an NAACP voter-registration campaign and currently heads a political data management firm in Jackson. He was beamed into the lecture via Skype because he’s working on the senatorial campaign of Democrat Mike Espy, a race that has made national headlines as it heads into a runoff against a Republican incumbent on November 27th.

“Elections are literally about power,” he said. “Power is the ability to make decisions. It’s the difference between people making decisions for themselves and having decisions made for them.

Next, Omari, who is the chief of staff for Mayor Lumumba, described the tradition of black leadership in Mississippi, saying that the black community is “connected in our DNA to the history of community organizing . . . in the 2018 midterm elections, two hundred thousand more people turned out than at the last election” because of efforts to get out the vote.

Lumumba’s daughter, Rukia, the third speaker and founder of the People’s Advocacy Institute, has spent years defending prisoners’ rights. Currently, she leads the Democratic Visioning Initiative, the goal of which is to create a participatory governing model in Jackson. She spoke of her father’s legacy as a black attorney who returned to Jackson to do human-rights work.

“You have to fight for the recognition [of poor people and minorities] as full human beings with the rights of every human being on the planet,” she said. “It’s important to turn anger into organized action for change . . . and if you’re organizing only people who agree with you, you’re not much of an organizer.”

Margaret Cerullo, professor of sociology, said, “In planning this event, we learned from Eqbal’s family that he had been in Jackson in the 1960s . . . connected to the SNCC [Student Nonviolent Coordinating Committee] Freedom Schools, “so we feel Eqbal’s spirit with us today.”

Cerullo, along with Javiera Benavente, Kara Lynch, and Mateo Medina, comprised the committee that planned the two days of events; the Jackson Rising lunch workshop was held on November 9 at Prescott Tavern.

More than 100 attendees — among them community partners, and mothers and children from the Pioneer Valley Workers Center — learned about black-led cooperative economics, food sovereignty, and environmental justice. They also participated in an interactive People’s Assembly, which modeled the process of Jackson’s brand of community activism.

“This is an enduring legacy that honors the man for whom it’s named,” said Hampshire President Mim Nelson in her welcoming remarks. “It reminds us of the teacher’s impact and underscores the promise and privilege every educator has to make a difference, to infuse scholarship with new ideas and paradigms, and to share one’s life experiences.” 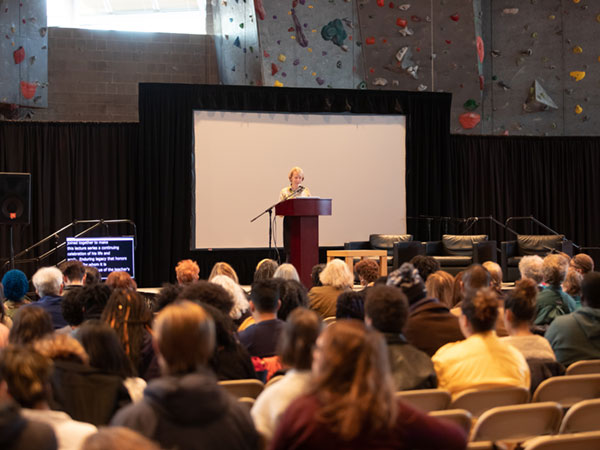 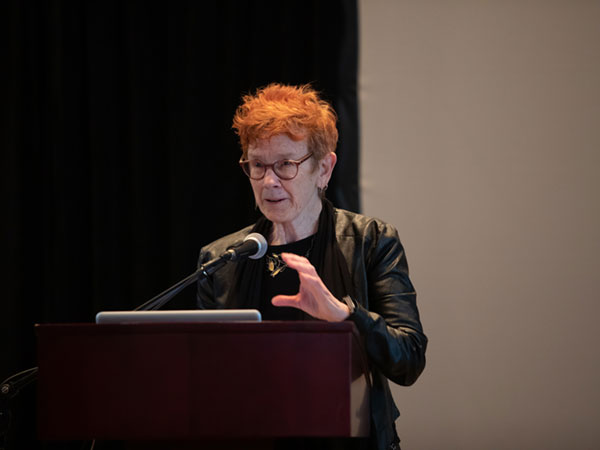 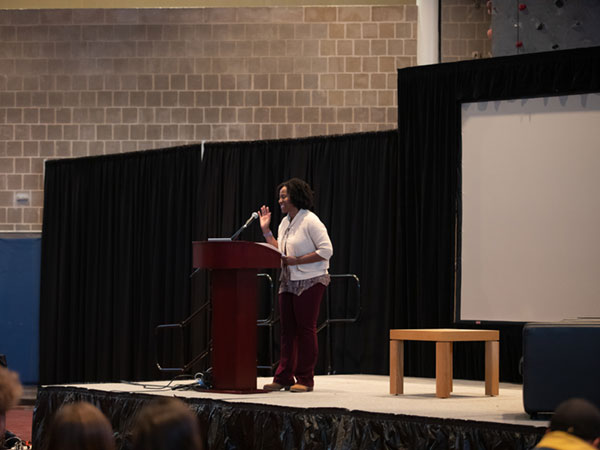 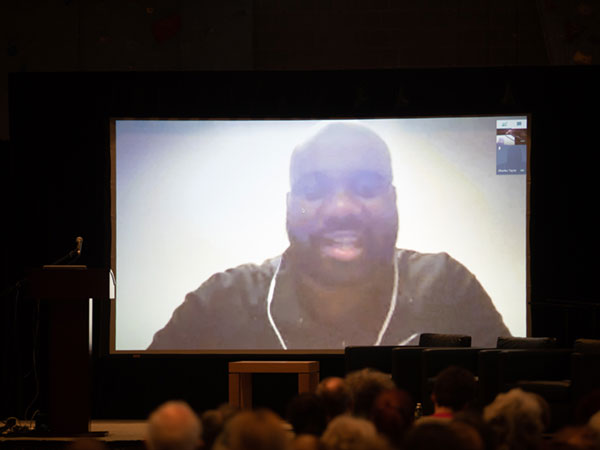 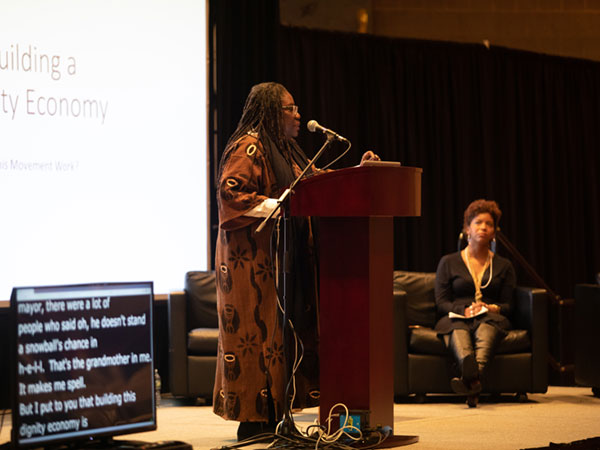 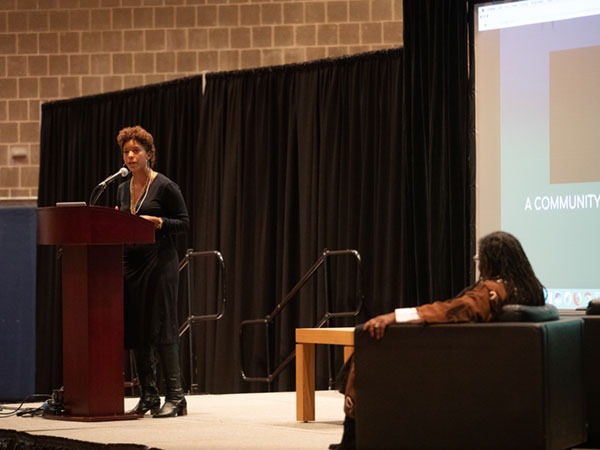 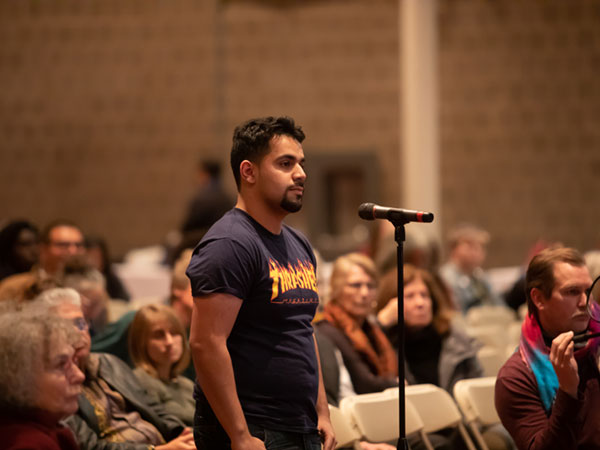