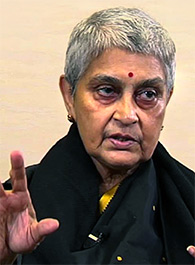 Professor Gayatri Chakravorty Spivak will deliver the seventh annual Schocket Lecture on Tuesday, April 15, at 5 p.m. in Franklin Patterson's Main Lecture Hall. Her talk is entitled "Class and the Disciplines."
Professor Spivak is a literary theorist and co-founder of the Institute of Comparative Literature and Society at Columbia University, where she holds the rank of University Professor.

She is best known for her 1988 essay "Can the Subaltern Speak?" It was a founding text of both postcolonial and subaltern studies. The 20th anniversary of the essay's publication occasioned a volume entitled Can the Subaltern Speak?: Reflections on the History of an Idea, in which eight scholars trace the impact of Spivak's groundbreaking essay.

Professor Spivak is the translator of Jacques Derrida's Of Grammatology, and she has also translated a number of literary works by Mahasweta Devi.

Her books include A Critique of Postcolonial Reason: Towards a History of the Vanishing Present (1999), Death of a Discipline (2003), and An Aesthetic Education in the Era of Globalization (2012). She is currently at work on a book entitled Du Bois and the General Strike.

She has also been an activist in rural education and feminist and ecological social movements since 1986.

Professor Spivak holds a Ph.D. in comparative literature from Cornell University and a B.A. in English (First Class Honors) from Presidency College, Calcutta. She is the recipient of numerous honorary doctorates. She received the Kyoto Prize in Thought and Ethics in 2012, and Padma Bhushan, the third highest civilian award given in the Republic of India, in 2013.

Professor Eric Schocket taught American literature at Hampshire College from 1996 until his death in 2006. A much-admired teacher and colleague, his courses inspired a decade of students. Nationally, he was a leading figure in working-class studies. His writings on figures like Herman Melville, Rebecca Harding Davis, William Dean Howells, and Langston Hughes engaged the important relationship between class and culture. His book, Vanishing Moments: Class and American Literature, was published in 2006.

For more information, please email Linda McDaniel, lmcdaniel@hampshire.edu, assistant to the dean in the School of Humanities, Arts and Cultural Studies.