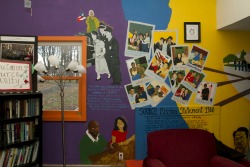 On October 26, 1989, SOURCE officially announced the name of the Lebrón-Wiggins-Pran Cultural Center. The center was named after Lolita Lebrón, Roland Wiggins, and Dith Pran because of their contributions to the struggles of Latino/Latina American, African/African American, and Asian/Asian American communities.

Lolita Lebrón was an important figure in the Puerto Rican Nationalist Movement. In 1954, the movement made its final attempt to free Puerto Rico from U.S. colonialism through militaristic tactics. Lebrón and her compadres proclaimed "Free Puerto Rico Now," as they injured five U.S. Congressman. She was arrested for this action and spent twenty-five years in the United States as a political prisoner.

Roland Wiggins was a music professor at Hampshire College and a pioneer in the area of education for Black children.

Dith Pran was a survivor of war-torn Cambodia. He was the subject of the highly-praised film The Killing Fields. Pran, with his unique perspective on the Far East and America, was a spokesman for Cambodian refugees around the world.

Check out the latest issue of our Inside newsmagazine: https://insidenewsmag.tumblr.com

Publications from La Fuerza to Currents, from RAW to The Inside, echo the voices of students of color and international students on campus. These newsletters reflect active engagement with campus issues and speak from personal and community spaces. The histories, struggles, and triumphs of the SOURCE community on campus are etched into these pages, giving voice to ourselves and our communities.

"Hampshire's Multicultural Center: a closer look at its rich history and mission," The Forward, Oct. 17, 2001.

The Cultural Center's multicultural resource library has archival videos from the Accepted Students Day 2002 protest and other events. Additionally, the center has documents regarding Cut Out Appropriation Day (2007), Action Awareness Week (2008) and local, regional, and national newspaper clippings from the 1988 Dakin Takeover.