'Anything by Itself, Hitched to Everything Else in the Universe'

Chiara Forrester is leading an ecology Division III research project, studying how plant life is affected by climate change, in the form of the symbiotic relationship between grasses and fungi.

"What I love about ecology is perfectly said by John Muir, ‘When we try to pick out anything by itself, we find it hitched to everything else in the Universe.’ I am deeply curious about the webs around me that shape their ecosystems, and every time I answer one question, I think of another. That's why science is such an exciting field, no matter how much you know, you still don't know everything. It's constantly evolving, and it forces you to evolve with it.

The past two summers I’ve run independent research projects at the Rocky Mountain Biological Laboratory (RMBL) in Colorado, working with Dr. Jennifer Rudgers of the University of New Mexico (UNM), studying symbioses between grasses and fungi. The lab is a high-altitude field station that attracts many esteemed ecologists and students. My summers have been completely immersed in ecology research.

We need to know how plant life is affected by climate change. This is important research because with climate change, we expect plant distributions to shift. Symbioses between plants and fungi are ubiquitous in nature. Understanding how these fungi affect their host plants and ecosystems is crucial to building a foundation of knowledge, which we can later use to test questions concerning the impacts of climate change. We may also learn that the plant species that harbor these symbionts are important to conserve, due to how they shape their ecosystems.

This past summer, Dr. Rudgers and I started a new experiment looking at how above-ground fungal endophytes may affect soil microbial activity, specifically enzymes, beneath its host grass, Festuca thurberi. To date, we are not aware of any study that has investigated this question. I have 80 plants growing in live soil at the University of New Mexico, which provide an experimental control for my field samples.  This summer I collected abiotic data, as well as soil, litter, and leaf tissue samples from eight sites across four mountains and two main elevation gradients based out of RMBL in Colorado. I shipped my samples to Hampshire where I will now analyze my field data and conduct soil assays.

For my other experiment, we are looking at how endophytic fungi might impact the distribution of their host grass. Building these symbioses into models of species distributions will help us make better predictions of how they will change with warming temperatures. We are curious if endophyte symbiosis aids P. leptocoma when competing against P. reflexa, which does not have an endophyte, in flooded soils, explaining their distribution? To address this, we grew P. leptocoma with and without its endophyte, in competition against itself and with P. reflexa, under both normal and flooded conditions. After data analysis, I will write manuscripts with my findings from each experiment and submit them for publication.

Working in the field, I realized my passion for plant ecology and saw the path to a career in science. After I graduate from Hampshire I plan to attend the University of New Mexico as a graduate student working with Dr. Rudgers.

I’m very passionate about environmental education, and I know that understanding the scientific process and investigating the ecosystems around me will make me a better educator. Having female role models, scientists like Jennifer Rudgers and Seeta Sistla, is really powerful for me.  I hope to be a role model for girls who are interested in science but feel they can't succeed because our culture tries to define their weaknesses, especially concerning quantitative reasoning skills.

Motivated by these issues, I’ll also be working on a “citizen science” component this year, developing ideas on how to approach citizen science in a more significant way. Right now, typically, organizations bring in people to help report and compile data, which is a great introduction to the scientific process, but there’s not a whole lot of meaningful learning happening. How can we use citizen science to bring in people who do not have the privilege of access to an empowering science education? How can we make science more accessible and less intimidating for students? How can the scientific community use citizen science to engage students in meaningful ways in the natural world?"

Seeta Sistla on Chiara's research: "When I interviewed at Hampshire in 2013, Chiara – at that time a second-year student – made a striking impression on me. During a post-talk discussion with a group of students, Chiara lit up the room with questions about the research I had presented. Chiara was such an enthusiastic, budding ecologist even at that early point in her pursuits that she followed up with questions via email. Chiara’s scientific curiosity generated a series of email exchanges which eventually helped guide her towards her Division III research, based at the Rocky Mountain Biological Laboratory and in collaboration with a researcher at the University of New Mexico. A keen scientist with a positive spirit despite the many challenges inherent to this work, Chiara has been conducting independent and largely self-directed research that included extensive fieldwork for nearly two years. Her research, which explores plant-fungi-soil interactions, will help to increase our understanding of the biogeochemical feedbacks that shape these ecological systems. She has proven herself to be a highly capable and inquisitive scientist." 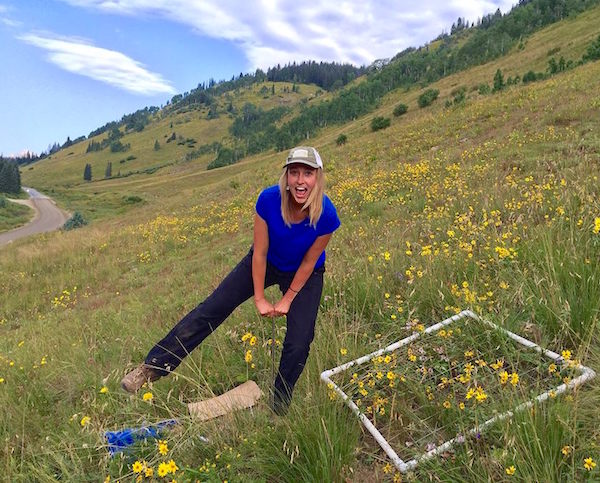