On Friday, April 29, almost four years after a committee of faculty, staff, and students began planning the campus’s first major building in more than 25 years, Hampshire hosted a ribbon-cutting ceremony to celebrate the completion of the R.W. Kern Center. Among the speakers was Board Chair Gaye Hill who, in her remarks, recognized two major goals of the building: to help secure the College’s future, and to start to address campus-wide space constraints.

Speakers also included Hampshire alum Bill Kern and his mother Leona, whose leading gift made the building possible. The building was made possible by gifts from more than 90 donors, giving $8.9 million toward the project goal of $9.3 million.

With President Jonathan Lash recovering from back surgery, Acting President Eva Rueschmann presided over the morning ceremony, held the last day of classes and open to all on campus. Rueschmann noted that throughout the multi-year process of planning and designing the Kern Center, the building committee continually invited fellow Hampshire community members to give input on its design and purpose. Literally hundreds on campus had participated in that process.

The result is a building that embodies the College’s values, one designed to meet the world’s most advanced green building standard, the Living Building Challenge. The Kern Center makes its own energy, harvests its own water, treats its own gray water, and was built from materials mainly from local sources, avoiding chemicals dangerous to those who produce, use, or are exposed to them. To be certified by the standard, the College will document for one year that the building has met all the standard’s imperatives.

The building will house the offices of admissions and financial aid, welcome areas, classrooms, and social spaces for students and visitors including a coffee bar. It was designed not just for classroom use but also to be integrated into curricula in a range of disciplines, among them technology, environmental studies, the sciences, math, and sustainability.

In his remarks, Bill Kern talked about lessons he’d learned from his father, Ralph Washington Kern, after whom the building is named. His dad, born during the Great Depression, practiced an appreciation of nature, the conservation of resources, and self-sufficiency.

“He believed you don't have to reinvent the wheel, but that's what his generation believed,” said his son. Referring to climate change and sustainability, he continued, “Now in the twenty-first century, we do have to reinvent the wheel because the times they are a-changing. This building is a prototype. Going forward, we're going to have to build and inhabit a lot more of these.”

Rueschmann began the event stating the administration’s commitment to work to address and resolve issues raised in preceding weeks by a group of students, which had caused tensions on campus.  Her remarks were interrupted by students from the group Decolonize Media Collective, who demanded more resources for sexual misconduct prevention and response, and expansion of scholarships and increased staffing for support services for Black students and other under-represented students. Rueschmann reiterated the College’s recent commitment to respond to these issues, by filling open positions, forming two campus-wide task forces, and other responses.

Other speakers at the ceremony were the architects Jason Jewhurst and Jason Forney of Bruner/Cott, and builder and alum Jonathan Wright, who reflected on the teamwork and contributions of hundreds of members of the design and building team, giving special mention to Hampshire’s facilities team and project manager Carl Weber.

Wright remembered his first visit to Hampshire as a high school student in 1968, visiting the Admissions office in Stiles house, and remarked on the equally illuminating experience of now building the new home for the Admissions office. “I am grateful for a lifetime and beyond for my Hampshire education, and the majesty of what we, together, have accomplished here today.”  (Learn more about the accomplishment of the architects and builders in building a non-toxic building.)

The building has already been the focus of multiple courses in academic year 2015–16: tutorial seminars and labs for first-year students; independent study projects in science, design, math, and architecture; and a technology class in which students wrote programming for monitoring and reporting the building’s real-time energy- and water-use data.

Coursework will continue this June when Professors Sarah Hews and Chris Cianfrani will teach a summer research course. Cianfrani describes it as an immersive experience in which students will conduct independent projects, participate in workshops in a number of fields (microbiology, chemistry, and statistics, for example), and attend the American Ecological Engineering Conference, June 6–10, where the professors and students will present their research.

The R.W. Kern Center–and its coffee bar–is slated to open officially in early June. The College is planning a full-day dedication ceremony for mid-September, themed “What Structures Should Do,” comprising a symposium and hands-on workshops designed to provide participants with a greater ability to influence green-building and sustainability education in their communities.

Hampshire has posted a photo album from the ribbon-cutting on Facebook, as well as the same album on Flickr. 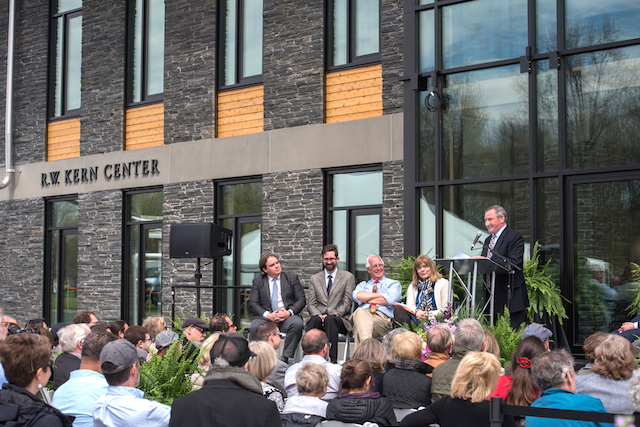 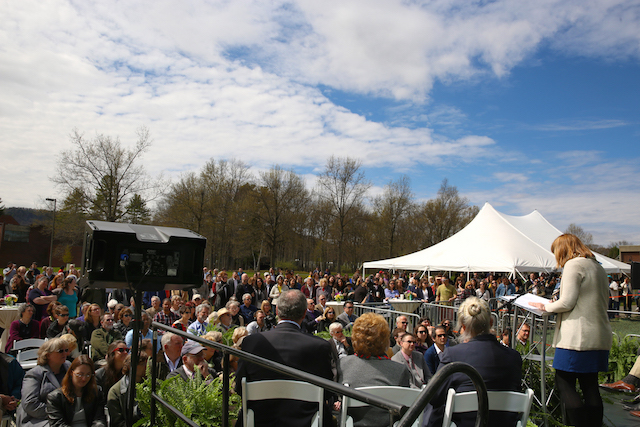 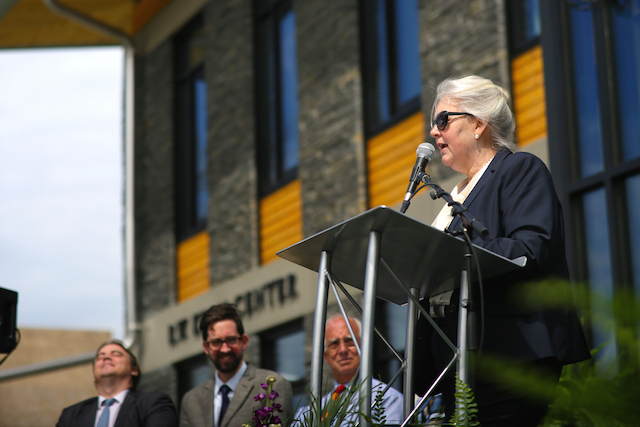 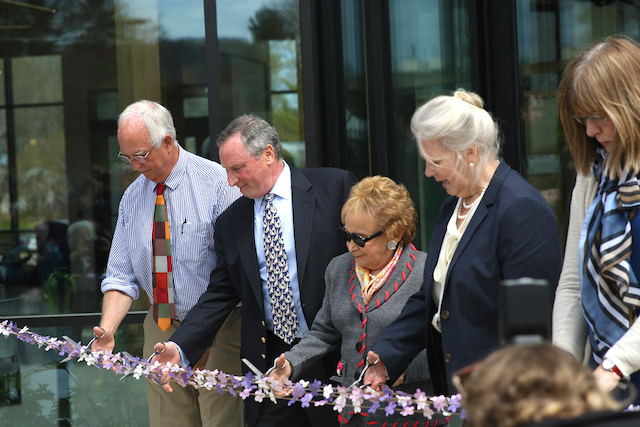 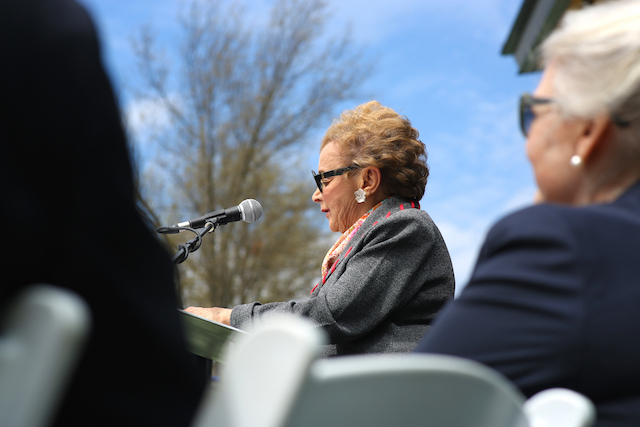 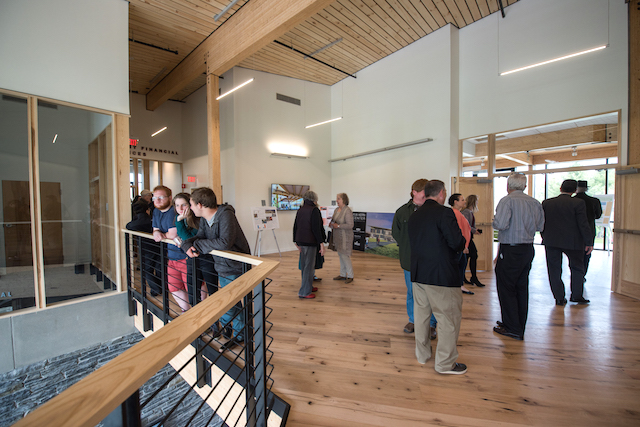 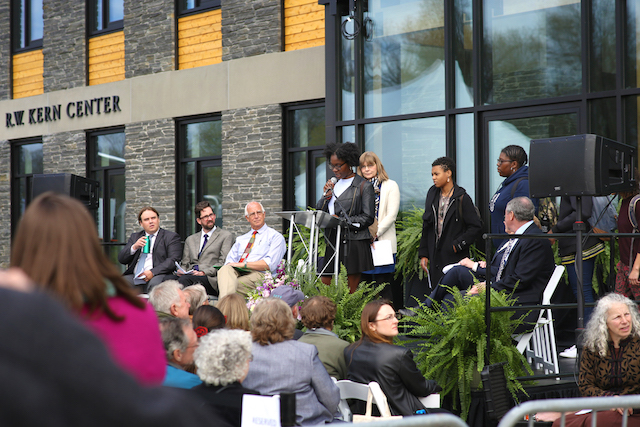 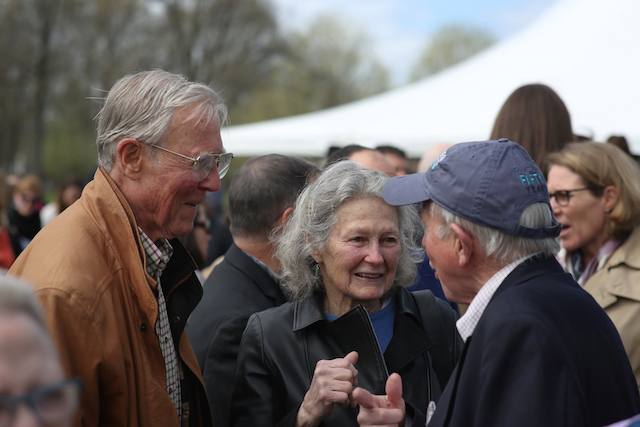 Streaming Knowledge
Hampshire alum Nancy Grimm elected to the National Academy of Sciences
Read Article
May 22, 2019: Letter on Presidential Search from Board Chair Luis Hernandez
Chair Hernandez announces the Board has formed a Presidential Search Committee with the goal of naming a new president this summer
Read Article
A Letter from Past Presidents in Support of Hampshire
"All students can and should be partners in defining the essential questions they wish to explore. This remains the approach most likely to create transformational outcomes."
Read Article
Stay In Touch
With The Communications Office
Snail Mail
Office of Communications
Hampshire College
893 West Street
Amherst, MA 01002
Phone + Email
413.559.5482
Fax: 413.559.5720
communications@hampshire.edu