Hundreds of members of the Hampshire community and invited guests attended the R.W. Kern Center dedication and symposium on Friday, September 16, a daylong event that explored from many angles the theme, “What Buildings Should Do.” World-renowned social-entrepreneurs and environmentalists gathered with students, faculty, staff, alums, and the broad campus community to examine questions through a schedule of keynotes, a dedication ceremony, and workshops. Among the headliners were Peabody Award–winning broadcaster and urban revitalization strategist Majora Carter; environmentalist/author Bill McKibben; and pioneer green architect Jason F. McLennan, creator of the Living Building Challenge.

Urban real estate developer Majora Carter was the first speaker. At their best, she said, our built environments can inspire. She told the story of how in the South Bronx she fought local waste facilities and industrial concerns to transform what was literally a dump into Hunts Point Riverside Park, a glorious, award-winning greenway to be enjoyed by the people of her “low-status” community. “People need to see in their communities something that is beautiful,” she said, “and makes them feel likewise.”

In her moving address, Carter said the questions she asks of a building are: “How does it affect people moving through it? Will they be positively or negatively influenced by what they see, hear, see, eat, and breathe? Does a building make them feel included in something special and beautiful?”

People can see and feel equality or inequality in buildings and in built environments: “It affects everything about them,” she says.

Carter said she was so proud of Hunts Point Riverside Park and felt so beautiful in it that, ten years ago, she and Hampshire alum James Chase got married there.

REMARKS WITH A MISSION

Next at the dedication ceremony, Hampshire alum Jonathan Wright, builder of the R.W. Kern Center, said the things we make, especially our buildings, should be friends to the future. “Our hands make shapes and promises they can keep, including those in soil, in stone," he said, "and in great and small buildings, that teach us to lean in to the wind, to pass through them refreshed.”

Hampshire parent and trustee Dayna Cunningham, who runs a planning lab at the department of urban studies at MIT, quoted the American philosopher and education reformer John Dewey, who believed the true source of democracy was a widespread tendency among the citizenry for empathy. The Kern Center embodies this idea of the cultivation of empathy, Cunningham said; every nontoxic part of the building is “a love note to our sweet, endangered earth, an invitation to us as citizen scientists to learn how to take care of her.”

Hampshire through its new building is using love as a method of analysis, she said, a form of critical inquiry, another reminder that, to know is not enough.

Hampshire alum Gary Hirshberg, a nationally admired environmentalist, founder of Stonyfield Farm, and one of the leading benefactors of Hampshire’s sustainability initiative, said he considers the Kern Center to be the start of an era for the College. The building contains the essential ingredient to make sustainability possible: thinking differently. Hirshberg said he was most excited by the inextricable involvement of students in every step — design, modeling, as well as improving the design, the systems, and the thinking.

“We have the knowledge of the problem and we have the motivation,” he said. “We need to train, inspire, and equip the next generation of students to go forward and make this thinking part of our economics. This is one of the most hopeful moments in the College’s history and in a world in dire need of hope and solutions.”

Next to speak was Hampshire second-year student Dante Mena, who said he grew up in the South Bronx and was raised to believe that “environmentalism as observed by white people just did not apply to me. That is until I came to Hampshire.” Last year Mena took the course “Modeling Systems,” which used the Kern Center as a living laboratory and changed his perspective on sustainability. “Our experiments modeling building systems shed light on our impact on the world,” he said, “on our interconnectedness.”

The professors took another leap when they brought their first-year students in June to a national engineering contest, where they competed in a design challenge against teams of graduate students. “Our students weren’t surprised when they won, they expected it,” Hews said. “They had developed confidence and a can-do attitude. The Kern Center is not only a wonderful place to teach sustainability; it’s also a place that inspires us to be lifelong learners and to just go for it.”

Hampshire alum Bill Kern, whose family is the R.W. Kern Center’s leading benefactor, is part of a third-generation real-estate and rental-housing business in New York City. He told those gathered that he remembered something his dad told him about rental housing business: “Rental apartments don’t innovate much, we don’t have need to reinvent the wheel.”

Today, referring to global warming, Bill Kern said, “we know the times they are a-changing and we will have to reinvent the wheel. We live in a world based on infrastructure that’s not sustainable. If we get this right, the R.W. Kern Center will be a prototype, a model, of what a sustainable future could look like, so that when regular houses built by regular builders for regular people are built to the same specs as the Kern Center, it will be a revolution.”

In their remarks, the building’s architects, Jason Forney and Jason Jewhurst, said the Hampshire community showed the courage to transform the center of its campus from asphalt to meadows, and then hundreds of members of our community committed to plan and design a building to the most difficult specifications of sustainability. In the Kern Center, they said, Hampshire is leading by example and giving its students more and better opportunities to learn to develop solutions to climate change and environmental challenges.

Concluding the ceremony, President Jonathan Lash said that the Kern Center speaks loudly in that it has already hosted hundreds of visitors from other schools and universities, architects, builders, and even GE, to explore ideas for its new headquarters building in Boston.

“Imagine a world in which most buildings lived the way the Kern Center does,” Lash said. “How many workers who manufacture or install building materials would be healthier, how many people who work in those buildings would feel better, how much of a reduction in carbon-dioxide emissions, waste treatment, and water use?”

Examination of these questions continued as Majora Carter was joined by one of the world’s leading environmentalists, Bill McKibben, cofounder of 350.org; and by pioneering green architect Jason McLennan, creator of the Living Building Challenge. The panel was moderated by Gabriel Arboleda, Five College professor of environmental design.

Carter said our communities and our world need activism and advocacy but, just as important, we need to prove out models for the kind of communities we want to create, from the South Bronx to Amherst. As Carter has been doing in New York City and as Hampshire has been doing in Amherst with our Kern Center and 100 percent solar initiative, we’re implementing replicable models of what a new future could look like. For one, the future could provide better quality of life for everybody, including low-income, low-status communities. Carter said we have to support people from these under-represented communities to promote green infrastructure and green economy where they live.

Bill McKibben said our most important mission as citizens is to work as hard as we can and go outside our comfort zones toward reversing the damage to our planet. One example is modeling new green buildings, but even more extreme, more people need to take on the fight against those interests committed to preserving the status quo. He expressed the hope that the Kern Center and buildings like it will be centers where organizers will rally to take on that fight to push traditional systems in directions they don’t want to be pushed.

McLennan said the Living Building Challenge is changing the whole building industry: changing the way products are made, changing regulations all over the country. The Kern Center is part of the tip of the spear driving huge change behind it. Solar is now affordable as an energy source in part because of the Living Building Challenge. The standard has driven huge advances in water-conservation technologies, he said, and in regulatory changes in states — for example, to allow rainwater catchment on building sites. These changes have resulted in reductions of thousands of tons of carbon for everybody, and have led countless builders to see they can do much more than they thought.

About the changing of government regulations, Hampshire President Lash had told the audience earlier that here in Amherst, Massachusetts, the town and its state counterparts helped the College find a way to construct a building much different from and more innovative than traditional designs. 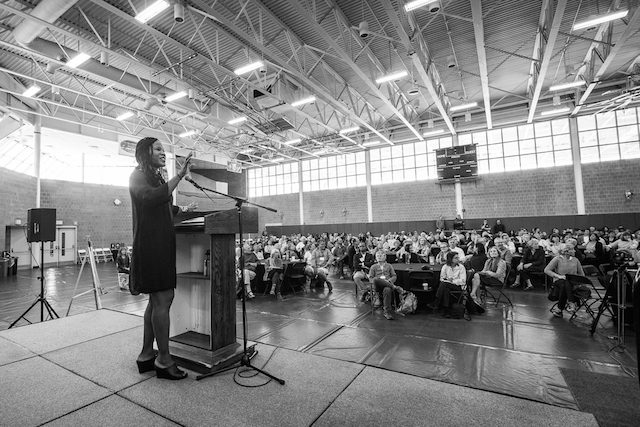