By Mike Medeiros and John Courtmanche

As fellow international students meeting on their first day at Hampshire in 1987, Sander Thoenes and Sandy Wolofsky decided to play tennis. Thoenes was from Holland, Wolofsky from Montreal, and Wolofsky remembers that on their walk to the courts he asked what she wanted to do with her life. She told him she wanted to be a foreign correspondent, travel, and change the world. He said his goal was basically the same: world traveler, foreign correspondent, ideally for the London-based Financial Times.

Wolofsky recalls, “I said to him, ‘Wouldn’t it be hilarious if one day we’re really old and we became journalists and get to tell everyone it started right here?’”

The two built exactly the careers they’d hoped for, but a tragedy derailed the happy ending. In September 1999, Thoenes, 30, was murdered by Indonesian soldiers while reporting for the Financial Times on the vote for independence by residents of the island of Timor.

Two members of the Indonesian militia’s Battalion 745 were indicted by the United Nations for his killing but they never stood trial. His death drew international attention. UN Secretary-General Kofi Annan commented, “It is largely thanks to the courage and determination of men and women like [Sander Thoenes] that crimes against humanity are brought to the attention of the world’s conscience.”

This September, the 17th anniversary of his murder, Wolofsky and more than a dozen of Thoenes’s other friends and former professors gathered at Sander’s Stop, the newly built campus bus shelter named in his memory. A group of Sander’s friends from the Hampshire community provided the funding for the stop, a tribute to him and his frequent use of the free Pioneer Valley Transit Authority PVTA buses for courses and activities throughout the Five Colleges. [Photo gallery below.]

“The bus stop is also a metaphor,” Wolofsky says, “for the whole idea of his constantly being on the move, traveling, exploring. We wanted to pass on to the next generation that there was a Sander Thoenes, to let them know what he’d done.”

The memorial plaque they installed at the stop reads “As a Hampshire student, Sander rode these buses to the classes that taught him about the transformative potential of journalism. As a reporter, he traveled the world recording and writing about the human struggle for freedom. In September 1999, East Timor voted for independence. Sander’s life ended when the Indonesian military shot him, preventing his articles from revealing their genocide. His death led to global awareness of the annihilation of the Timorese. Whatever journey you are about to take, you have the power to make it count.”

The bus stop joins another memorial at Hampshire, the Sander Thoenes Scholarship Fund. For more than 15 years, it has made annual awards to Hampshire students pursuing projects in journalism, documentary media, international relations, globalization, peace-building, and human rights. Examples of student research supported by the scholarship are fieldwork in Senegal on the accountability of nongovernmental organizations, an investigation of the implications of oil politics in central Asia, and a study of the Sri Lankan civil war.

Award amounts range from $300 to $1,000. This year’s application deadline is October 14, learn more on the scholarship's home page.

The fund is administered by James Miller, Thoenes’s Division III chair, who attended the Sander’s Stop dedication and still keeps a copy of Thoenes’s thesis in his office. He recalled the sadness he felt on learning of his former student’s murder. Later, Miller visited the Financial Times office in London, where he saw in the newsroom a photo of Thoenes, displayed in tribute.

“Sander was an ideal Hampshire student,” says Miller. “He did incredible work, almost entirely on his own, and was a very sophisticated, self-knowing person from the moment he arrived.” He adds, “He was also frequently headed off on a bus.”

Faisal Mian, one of Sander’s closest friends at Hampshire, remembers that when a group of them pooled a few thousand dollars to buy a car, Thoenes didn’t join in. “There couldn’t be a more fitting dedication to him at Hampshire than this bus stop,” says Mian. “He used the resources of the Five Colleges to the max.”

His friends say Thoenes’s peripatetic seize-the-world existence was a constant inspiration. Sander infused his spirit of adventure into all his college studies and activities, says Mian, even the international student Christmas party: Sander would send his friends all around campus on epic, four-hour “Sinterklaas” scavenger hunts for gifts.

His father, Dick Thoenes, described his son: He was “first of all a world citizen. That’s why he chose to study at Hampshire in the first place, why he did an internship in San Francisco at the Center for Investigative Reporting, why he found a job in Moscow and later in Almaty [Kazakhstan] and Jakarta. He spoke several languages fluently and he felt at home everywhere. And he made friends everywhere. I am proud that he was my son.”

At the dedication event, Hampshire writing instructor Will Ryan, one of Sander’s professors, said, “I remember how lightly he wore his knowledge, and how kind he was to others.”

One of Sander’s frequent destinations was Mount Holyoke College, where Professor of Russian Studies Stephen Jones was a member of Thoenes’s Div III committee. For his thesis, titled “Between Glasnost and a Free Press: Soviet Journalism in the Gorbachev Years,” Thoenes spent three months of fall 1991 in the former Soviet Union interviewing 43 journalists, media experts, and government officials on the role of the press during the reforms of Mikhail Gorbachev. This was shortly after the August coup attempt against the president, whose push for glasnost —a series of reforms intended to allow more media freedom and show more transparency in the way the government was run— led hardline members of the Communist Party to attempt to seize power from him.

Like Miller, Jones stayed close with his former student after graduation. “He knew he wanted to work for the Financial Times,” Jones says, “and he took all the steps he needed to get there, including writing as a stringer in Moscow, I’m sure ten stories a day, and not quite sure if any of them was going to be published. The bus-stop plaque is a reminder to each student of his or her own potential, and also a reminder about the risks people take because of their values or their dedication.”

In the words of his college friends: “The hope is his memory will be a catalyst for Hampshire students to devour the ‘special sauce’ and know that they too are responsible for helping shape our world.”

For those who would like to share their own stories and photos of Sander Thoenes, people who knew him are putting them together at www.sandersstop.com. His family and friends also maintain a memorial site, at www.memorialforsander.org. 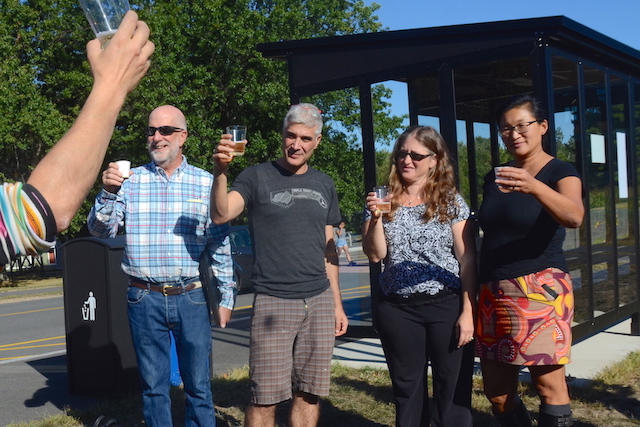 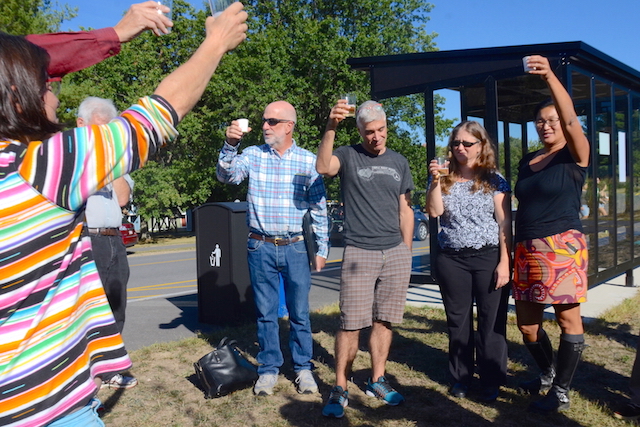 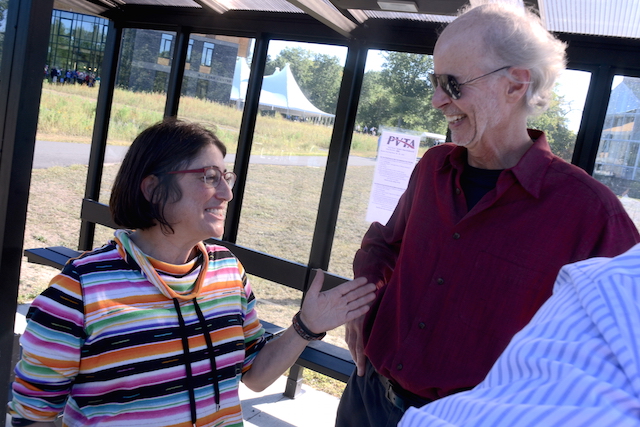 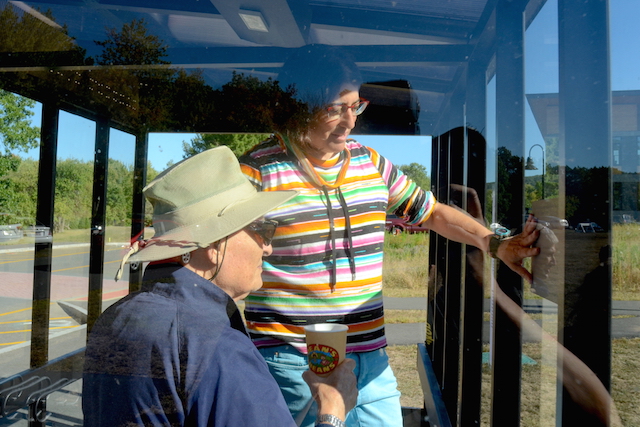 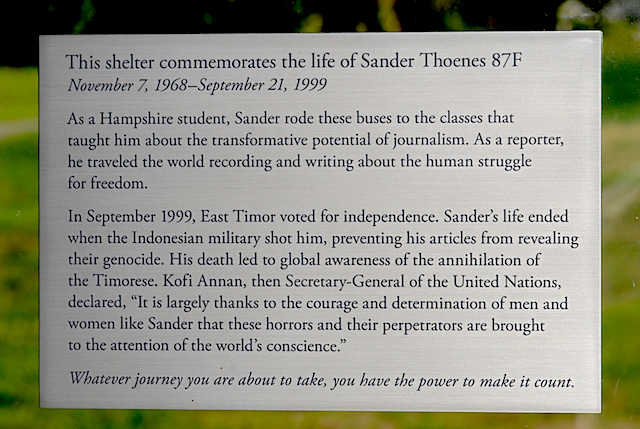 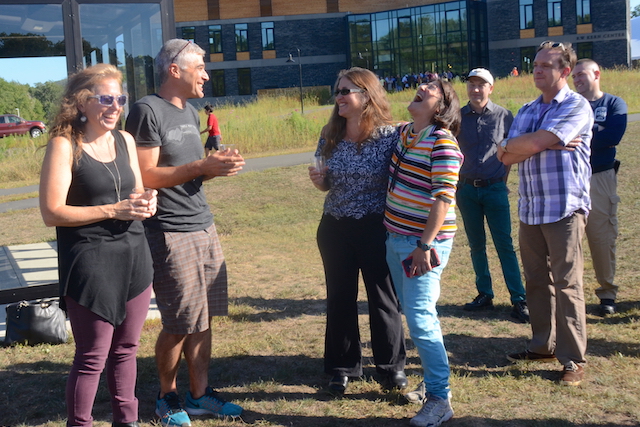 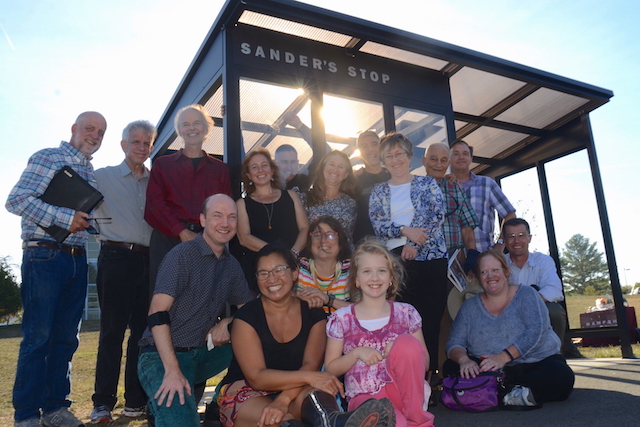