By Mike Medeiros and John Courtmanche

For the past two decades, Hampshire undergrads studying science have had rare access to a mass spectrometer for analyzing chemical properties of solid objects. Now this year the National Science Foundation has awarded the college a major research grant to acquire the latest iteration of the instrument, great news for students and faculty who want to be trained in its use.

Professor of Chemistry Dula Amarasiriwardena, who is overseeing the acquisition of the new spectrometer with Professor of Biological Anthropology Alan Goodman, explains it's rare for undergraduates to have access to this instrument.

Hampshire trains even interested first-year students to use it as part of its unique program that empowers students to take the lead on research and by year four to submit to peer-reviewed conferences and journals. Twenty percent of students who complete Division III research at Hampshire are accepted to present at conferences, and five percent become lead authors of published journal articles, a rare feat for undergrads. (Learn more about Hampshire's unique, proven academic program.) (See list of published student authors.)

Students benefit from mass spectrometry training when applying for graduate school and internships, as well as for jobs and research opportunities such as pollution research and testing of contaminants in pharmaceuticals.

Dula says the new instrument, to be purchased with the NSF grant of $196,283, features “increased sensitivity that allows for even more delicate research. We’ll be able to get very fast data collection, including metal nanoparticle detection, that will facilitate better environmental monitoring such as of water and food systems to improve public health and support food security.”

For her Division III capstone research last year, Hannah Huggins used the spectrometer to study ancient Mayan teeth and try to assess the degree to which the Spanish who invaded their region in the 16th Century had affected their health.

Professor Goodman, serving on her faculty committee, explained that Huggins studied teeth excavated from the Lamani archaeological site in northern Belize. These teeth dated back to around the time of the Spanish conquest of the Maya in the 1500s.

In the spring, Huggins presented the findings of her research at the American Chemical Society’s Connecticut Valley Undergraduate Symposium.  (Read more about Huggins’ Division III research project and findings.)

This year, Division III student Shelby Gaiss is using the spectrometer to research corn seeds and see how heavy metals concentrate in different tissues in the seeds, as well as how the metals move as the seeds germinate.

And Ryan Ellerby has used the technology to discover how the epidermal surface of rice husks could absorb trace metals from polluted areas. “Trace-metal pollution and being able to sequester it using biomaterials was an interest of mine,” he says. “I’m interested in the micro, nano, macro scale of plants and the differences among them.”

Last summer, he and Gaiss interned with Amarasiriwardena in China.

“Studying the pollution in China and around the world, and knowing the pollution from where I’m from, near the Hudson River, which is contaminated with PCBs and other pollutants, these are pretty pertinent chemical problems we’re trying to solve,” Ellerby says, “and I’m hoping to use a knowledge of nanoparticles to change that.”

The partnership between Goodman and Amarasiriwardena in utilizing this technology across chemistry and anthropology is representative of Hampshire’s encouragement of collaboration across disciplines.

Goodman, who earned a PhD from UMass, is an expert on the impact of poverty, inequality, and racism on health and nutrition. He is a former president of the American Anthropological Association (AAA) and continues to codirect the AAA’s public-education project on race (understandingrace.org).

Amarasiriwardena is a global expert on toxic-metal contamination in water and pollution of all types threatening our communities. He has a PhD in analytical chemistry from North Carolina State University and his MPhil in chemistry from the University of Sri Lanka. His research, much of it coauthored with his students from Hampshire and the Five Colleges, has been published in some 50 peer-reviewed journals.

“Our collaboration has been so serendipitous,” Goodman says. “If you’d asked me thirty or forty years ago if one of my main collaborators would be an analytical chemist, I wouldn’t have guessed just how well our expertise would mesh over teeth and a piece of equipment.”

One of Amarasiriwardena’s current projects is a study of a lithium-contaminated region in Chile’s Atacama Desert and the modern-day population who are exposed to this threat. In parallel, for more than a decade he has been studying Chilean mummies in that same area; his research on the accumulation of trace metals in the mummies’ hair revealed evidence of arsenic poisoning.

In March 2016, he returned to Chile through a Fulbright Specialist Program award in environmental science and chemistry, which enabled him to expand his research.

“There are all sorts of minerals — lithium, arsenic, lead, and boron among them — that are unusually high in this particular region, and they’re leaching into the drinking water,” he says. “Research on the mummies helps us learn from past exposure, and we can apply that to modern populations in the region. They’re very similar situations, just in different contexts.”

The new-generation spectrometer, to be installed at Hampshire in early spring 2017, will facilitate better environmental monitoring methods for water and food systems. The instrument will also enable researchers to engage and support new and existing partnerships across the Five Colleges, as well as to enhance collaborations with regional and international academic institutions to address environmental-health research questions of national and global interest.

Major findings and data will be presented by students and faculty at national and international meetings and published in peer-reviewed journals and mass media. 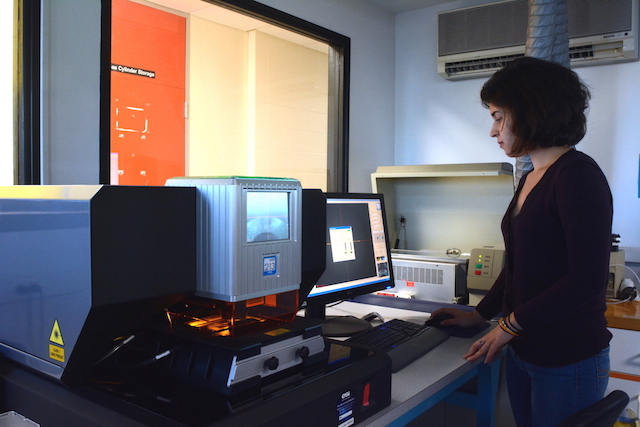