The migratory flyways of birds have evolved over eons, oriented to correspond with their biological needs. However their flyway maps are rapidly losing relevance as ecosystems are altered by human-induced climate change. Research on species ranging from mallards to cranes has shown that long-established breeding grounds are increasingly inadequate. To ensure that birds arrive at the right place at the right time, modern flocks require on-the-fly guidance directed by advance reconnaissance. The first such system will be exhibited at the Hampshire College Art Gallery beginning on February 1st, in a new iteration of an exhibition originally conceived with the Samek Art Museum at Bucknell University.

"The basic idea is to provide flocks with escort drones that guide birds with strong electromagnetic fields," says experimental philosopher Jonathon Keats, who has adapted well-established human technologies to avian specifications. "We electrically override the birds' geomagnetic navigation system so that they fly farther west or east according to where ground cameras detect optimal habitats."

GPS for birds is one of nearly a dozen human innovations that Mr. Keats is retrofitting for the benefit of other species, especially organisms that have been adversely affected by human civilization. In addition to the drones, Hampshire will showcase several of these technologies, including urban camouflage for reptiles and fiber optics for corals.

"Over the past century, engineers have become increasingly interested in the innovations of other species, and adapting them to serve human needs," says Mr. Keats. "This process of so-called 'biomimicry' is now commonplace." Velcro is based on thistles, for example, and the beak of the kingfisher provides just the right curvature for the nose cones of aerodynamic bullet trains. "We plunder other organisms' intellectual property and use it to make the world better for us at their expense," Mr. Keats asserts. "I think it's high time for some reciprocal biomimicry."

The Reciprocal Biomimicry Initiative is the world's first and only program dedicated to systematically reviewing human technological capabilities on behalf of non-human entities. Under the direction of Mr. Keats, research is aimed at identifying both opportunities and needs.

Some matches are relatively obvious, such as the application of urban camouflage to turtles. "As cities encroach on their habitats, turtles' natural camouflage no longer hides them from predators," Mr. Keats observes. Black-and-beige digital camouflage developed for urban warfare offers a readymade improvement, and can be wrapped over turtle shells like netting on an army helmet.

Mr. Keats's plan to provide corals with fiber optics is directed more toward the future, as water turbidity changes. "It's really about providing photosynthetic organisms with an alternative energy source," says Mr. Keats. "One of the most daunting challenges of climate change is uncertainty, so long-term survival is a matter of resilience." His solar-powered fiber optics will provide stable illumination regardless of oceanic conditions.

The innovations on view at Hampshire remain in early stages of development, according to gallery director Amy Halliday. “Hampshire itself is an incubator for future-oriented problem-solving," she says. "Students are trained to think outside the box as they respond to urgent environmental and social issues. Jonathon Keats’s work often takes its cue from easily accessible materials and technologies transformed for new purposes. This approach offers the kind of provocation to thinking and design that really inspires people to get started - now! - with creating the world they want to see.”

Mr. Keats concurs that a lot of work will be needed to transform his models and prototypes into global systems with worldwide ecological impact. "My drones are made out of balsa and I acquired my wind turbine on eBay," he confesses. But he also holds out the possibility that these inventions may ultimately prove unnecessary.

"Technological advancement is one way of overriding previous technological excesses," he says. "We're quite good at it, and reciprocal biomimicry can certainly outfit other species with our preferred survival mechanism. An alternative is to ask how other species avoid the evolutionary end-game of self-perpetuating technological acceleration." Mr. Keats and his Hampshire collaborators are currently posing those kinds of complex questions to slime molds, which have been scholars-in-residence for the past year. Results will be exhibited adjacent to his reciprocal biomimicry prototypes, and revealed to the media in early February.

"Ultimately we need to learn to think like other species if we're to live in concert with them," says Mr. Keats. "That's a form of biomimicry that might benefit all organisms."

The Reciprocal Biomimicry Initiative will be exhibited at the Hampshire College Art Gallery from February 1 to March 9, 2018. For more information, see https://sites.hampshire.edu/gallery/the-reciprocal-biomimicry-initiative...

Acclaimed as a "poet of ideas" by The New Yorker and a "multimedia philosopher-prophet" by The Atlantic, Jonathon Keats is an artist, writer and experimental philosopher based in San Francisco and Northern Italy. His conceptually-driven interdisciplinary projects explore all aspects of society through science and technology. In recent years, he has installed cameras with a thousand-year-long exposure – documenting the long-term effects of climate change – at Arizona State University and Amherst College; opened a photosynthetic restaurant serving gourmet sunlight to plants at the Crocker Art Museum; exhibited extraterrestrial abstract artwork decoded from Arecibo Observatory radiotelescope data at the Judah L. Magnes Museum; applied quantum mechanics to banking – coaxing money into a quantum superposition to be shared by everyone – at Rockefeller Center; and attempted to genetically engineer God in collaboration with scientists at the UC Berkeley. Exhibited internationally, Keats's projects have been documented by PBS, Reuters, and the BBC World Service, garnering favorable attention in periodicals ranging from Science to Flash Art to The Economist. In recent years, he has lectured at institutions including UC Berkeley, Stanford University and the Los Angeles County Museum of Art (LACMA), which recently awarded him a 2015-16 Art + Technology Lab Grant. His latest book, You Belong to the Universe: Buckminster Fuller and the Future has recently been published by Oxford University Press, which also published his previous book, Forged: Why Fakes Are the Great Art of Our Age. He is currently a Research Fellow at the Nevada Art Museum's Center for Art + Environment, and the Black Mountain College Legacy Fellow at the University of North Carolina - Asheville. He is represented by Modernism Gallery in San Francisco.

ABOUT THE HAMPSHIRE ART GALLERY

The Hampshire College Art Gallery has been in operation since the College opened in 1970. The Gallery features artists of national and international acclaim, showcases student thesis work, and supports College curricula and teaching. It is dedicated to experimentation and interdisciplinarity in exhibition content and curation.

Jonathon Keats, 2017, GPS For Birds: Autonomous gliders fly with flocks of birds, guiding them on alternate migration routes and directing them to alternate nesting sites as climate change alters customary habitats. Flocks are navigated by distorting magnetic fields with strong electromagnets attached to the airplane fuselage. In this conceptual model, a magnet has been attached to a toy airplane, influencing the compasses beneath it. Image courtesy of Jonathon Keats.

Jonathon Keats, Aqua Lungs for Sea Snails, 2017. A life support system allows sea snails to migrate to land when ocean acidification imperils their shells. A second version allows land snails to migrate to the ocean in case of extreme acid rain. This conceptual model shows the valves used to maintain the required microenvironment inside the snail’s shell. 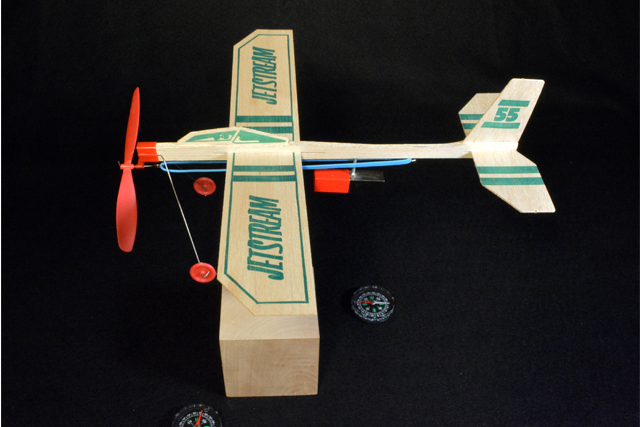 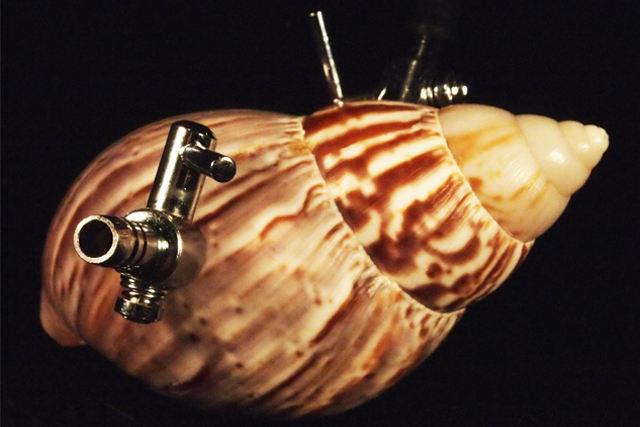