The College appoints new professors to expand the curriculum in new, innovative ways

Hampshire College welcomed five new full-time faculty members to campus this fall. Experts in their fields, each is teaching under a unique title not previously featured at the College.
Sue Darlington, Dean of the School of Critical Social Inquiry, where four of the hires teach, says they are exemplary of Hampshire’s unique educational pedagogy. “These faculty represent innovations in academia. One of the goals of the strategic hiring process was to find new, cutting-edge areas for our curriculum, not just to fill the exact positions of retiring faculty,” she says. “This enabled us to define new approaches, such as integrating Native American studies and environmental justice, areas not normally connected except maybe through an individual’s research.”
Tammy C. Owens
Tammy C. Owens, assistant professor of diasporic youth cultures and ethnic studies, earned a bachelor’s degree in social work from the University of Southern Mississippi, a master’s in women’s studies from the University of Alabama, and a doctorate in American studies from the University of Minnesota.

Owens’s research is on the ways black girls and women use fiction and personal stories as creative sites to theorize their own transitions from girlhood to womanhood and challenge dominant narratives of American childhood. Her work has been published in the Journal of the History of Childhood and Youth and a coauthored essay, “Towards an Interdisciplinary Field of Black Girlhood Studies,” is forthcoming in the journal Departures in Critical Qualitative Research. Among Owens’s interests are the histories of children and youth of color and youth activism and education; courses are Black Feminism, Queer of Color theories, and African American Children’s and Young Adult Literature. Owens is a trained social worker whose practice primarily helps youth of color experiencing homelessness.

Tara Bynum is an assistant professor of African American literature and culture. She received an AB from Barnard College and holds an MA and a PhD in English from Johns Hopkins University.

Her courses that explore the many ways in which people experience blackness as a racial identity, as a cultural category, or as a mark on the skin. At a time when social media respond to the deaths of unarmed black men and women with #blacklivesmatter, her students examine what makes life matter, what literature is, and what race or culture means, historically and at present.

These questions find their way into her book project, Reading Pleasures, which looks at how 18th-century enslaved and/or free men and women felt good or experienced pleasure in spite of the privations of slavery, “unfreedom,” or white supremacy. Her research and writing have received generous financial support from the National Endowment for the Humanities, the American Antiquarian Society, the Library Company of Philadelphia, Rutgers University, the University of Pennsylvania’s McNeil Center for Early American Studies, and the College of Charleston. Her essays have appeared in Common-Place, Legacy, J19, Criticism, and American Periodicals.

Tara Bynum’s faculty biography
George Fourlas
George Fourlas, SHIFT assistant professor of applied ethics and the common good, holds a BA in philosophy and legal studies from the University of San Francisco and a doctorate in philosophy from the University of Oregon.
Fourlas’s interests lie in the field of restorative and transitional justice: that is, the intersection of social-political philosophy, critical race theory, ethics, and conflict resolution. He has taught a range of courses related to his work, and his publications have appeared in peer-reviewed journals such as the International Journal of Transitional Justice, Critical Philosophy of Race, and Philosophy and Social Criticism. Along with several forthcoming articles, George is working on a book entitled Justice as Reconciliation: Political Theory in a World of Difference
George Fourlas's faculty biography
April Merleaux
April Merleaux, assistant professor of U.S. foreign policy and empire studies, has a BA in history from Reed College, an MS in agriculture, food, and environment from the Tufts University Friedman School of Nutrition Science and Policy, and PhD in American studies from Yale University. Before joining the Hampshire College faculty, she taught at Florida International University for seven years.

Merleaux’s research and teaching focus on the 20th-century United States in an international context, with a particular concentration on the Caribbean and Latin America. She is interested in cultural politics, the cultures of capitalism, race, and empire; critical food studies; environmental studies and transnational environmental-justice movements; immigration and ethnicity; consumer cultures; rural history; and transnational and cultural research methods.

Sugar and Civilization: American Empire and the Cultural Politics of Sweetness was published by the University of North Carolina Press in 2015. The book tells the story of sugar from the Spanish American War through the New Deal of the 1930s, describing how workers and consumers in multiple locations came to eat huge quantities of sugar. The cultural logic connecting imperialism, trade, and immigration policies was the same one that facilitated new habits of sugar consumption within the United States and its territories. Sugar and Civilization won the 2016 Myrna Bernath Prize from the Society for Historians of American Foreign Relations.

April Merleaux's faculty biography
Ashley Smith
Ashley Elizabeth Smith, instructor of Native American studies and environmental justice, earned a BA in anthropology and French studies from Wheaton College and an MA from Cornell University. She will receive her PhD in anthropology with a graduate minor in American Indian and indigenous studies from Cornell University this year.

Research topics of interests are indigenous decolonization and revitalization, especially in New England; indigenous–settler relations past, present, and future; and the politics of knowledge production in settler colonial societies. Her most recent work is on the place, history, and memory of the Wabanaki village at Nanrantsouak on the Upper Kennebec River, in Maine.
Ashley Smith’s faculty bio
Below:  Ashley Smith, Tara Bynum 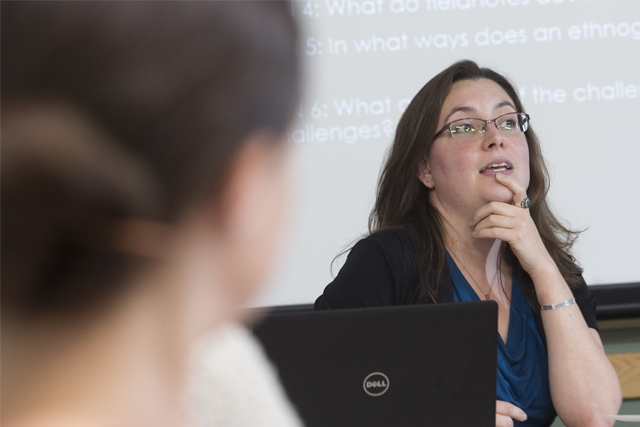 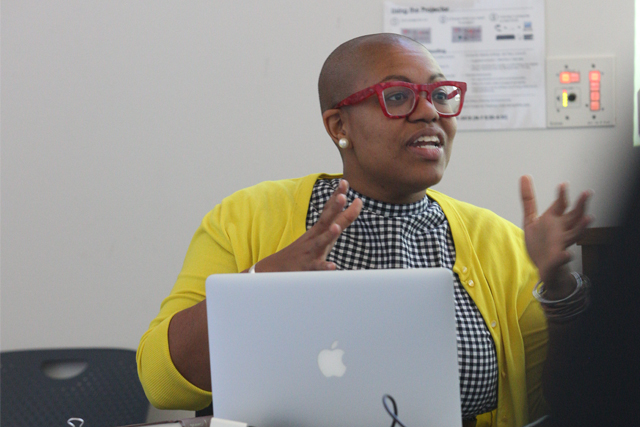